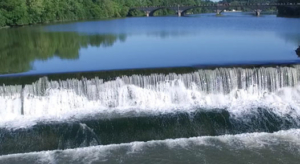 Below are links that show the location and other info for low head dams in Ohio, Kentucky, and Indiana.

A low-head dam is a man-made obstruction typically built within a river or stream channel, and spanning from bank to bank. Many variations exist among the thousands of low-head dams on streams and rivers throughout the United States, but they generally:

Low-head dams can be deceivingly dangerous. At times the water around them appears tranquil and inviting; however, moderate to high flows over such dams create strong turbulence and recirculating currents that can push victims underwater, and then pull them back toward the face of the dam in a repeating cycle. These structures have been known to trap unsuspecting victims in dangerous conditions. Even the strongest swimmers and rescuers wearing the best personal floatation devices have drowned at low-head dams. View the WFYI documentary ‘Over, Under, Gone: The Killer in Our Rivers’.